Awesome and stupid have become pretty much the same to me. I don't mean that I say 'awesome' ironically, or that I think awesome things are dumb; I mean that I think everything stupid is awesome. It's a kind of surfer-like Zen type elimination of oppositions or something stupid and awesome like that.

For that reason I keep a list when I'm watching TV on DVD, most of which is stupid and awesome, or listening to NPR (less awesome and usually less stupid) of Stupid/Awesome things I see and hear.

Let me show you it:

-a brainwave amplifier (for telekinesis) which is an oscilloscope
-rocket exhaust=save vs. Dargon Breath or raygun, er, Death Ray
-tofu is the elixir of immortality (The Elixir would do, I suppose) and can make you gay
-giant chickens can be herded to provide ammunition for dung catapults
-white rhino-apes with venomous fangs and razorbacks (mugatas/mugatus, Star Trek TOS)
-Sorceresses called Cunutus (same Star Trek ep.)
-a butler who is not snooty
-mosquito torpedo
-a Howitzer that blasts out fresh blueberry scent (why the hell is that on the list?)
-this one was written by J.M. Straczynski: a mound of melted glass and Giger-stuff housed in a bell-jar room that can INCREASE TENFOLD the EVIL of anyone stepping inside. How many EVIL points do you got? TEN TIMES AS MANY. Oh, and it's called THE EVILGIZER.

-eyes pressed and laminated like flowers
-glowing green HULK RAGE serum (that's from Buffy)
-bloated, hermaphroditic toad-bats spooning their own juices over themselves (that's Huxley on Proust)
-Drownies (they come out in the Witching Hour to drag you to duck ponds and strangle you in the murk)
-Gorillazilla
-a shark bazooka
-chimp-o-rillas (purple monkeys with pink Asimov hair)
-Gators with shells

And the capper: the slothtopus: eight three-toed arms in a ring around a bear-like body with a wide-eyed and beaky head, each tawny-green arm lined with doubled rows of toothy suckers, dental openings, each with a hungry gullet of its own. (I made that one up.)

The Wages of Sorcery

This is a riff on a table James Maliszewski did at the always excellent Gorgnardia. I'm just gonna spitball my ideas for the sorcerous disfigurements that might have caused the Filmation magic-users to get all villainous looking.

1-SKULL FACE (roll again for color: d4, white, pus, pus with neon green, red)
2-BRIGHT YELLOW SKIN (or list your own colors, be sure to include the Carcosa colors, fuligin and squant, and other colours out of space)
3-REPTILIAN ECZEMA (this is why Hordak's court magician Shadow Weaver is all covered up. I can't tell you why she still looks so hot.)
4-STUPID-LOOKING ROBOT/SKULL FACE (sometimes the results of disfigurement are lame--tough break Hordak)
5-HOUR-GLASS EYES (It's from Dragonlance. What's that? No, I'm pretty sure it's rad)
6-MONEYEYES (Harlan Ellison. Haven't read it, but I'm sure it's rad) TEETH-EYES (thanks, Chris!)
7-BLOOD ADDICTION (maybe this is where vampires come from)
8-TORMENTING VISIONS (like the voices of schizophrenia, but prophetic)
9-MOONLUST (werewolves, ho-hum, but also Lunatic elves. What? Elves? I don't think so)
10-CHAOS GIFTS (a la Cthangband, could also be drawing the attention of devils and mischievous godlings)
11-OCTOPUS FACE (this is probably the reason I'd take up sorcery)
12-NEUROSIS (Y-A-W-N, but if you get it again, it goes up to PSYCHOSIS)


So, this table is crap right now, but if I put it out there maybe I'll be ashamed enough to come back and get it ready for use.

I ain't read no Balzac (yet), but the featured article on Wikipedia today tells me that he's got a book about "a magic piece of shagreen that fulfills [one's] every desire. For each wish granted, however, the skin shrinks and consumes a portion of [one's] physical energy."

I can't imagine this hasn't been used in our game before, and it's gonna be used again. By me. What I dig is, as Wikipedia also tells me, that shagreen (chagrin in French, how's that for a suggestive name for a magic item?) is leather from a horse's back or an onager--a wild ass. And nowadays from shark or ray skin. It keeps getting AWESOMER.

I guess there should be a donkey skin in the story somewhere. I forgot that bit. Anyone remember? I know. Wikipedia.

The Playable Races of The Mutant Earth

EDIT #2: I can't believe I forgot the Trollans and their Retarded Magic--hold up, I'm not using an insulting term that used to refer to mentally handicapped people--no, Trollans, like Orko, are unable, when on worlds other than Trolla, to use their magic to its full potential--it's retarded. Other than that, they're floating goblins.

EDIT: I forgot the Mutants of Thundera! (Frogmen, Baboonmen, and the other one. Also Turtlemen and Ratmen, if you know what I mean.)
And there have to be Skunkmen of Eternia. A bunch of 'em. Skunkmen.

These races will be used in my OD&D and Swords & Wizardry campaign.

Thunderans:
All Thunderans have a Beast State power, a sort of lycanthropic double-self which embodies the idea that "knowledge can't track experience to its lair," except Jaguars who instead have a Spirit Shape and Haunt powers, and other Jedi mind tricks and shit.

Eternians
Can opt to begin play with knowledge of Eternian/Etherian space piloting. Equally proficient with Science and Magick.


Etherieans
Can opt to begin play with knowledge of Eternian/Etherian space piloting.

Horde races are proficient with Science (by which I mean technology)
Human
Mantennoid (giant head, annoying voice)
Grizzloid (wolly coat, rending claw & jaw)
Horde Robot (worship a god not made of wood, I guess these 'robots' have Cylon software)

Other
Gungans (originally diaspora from the wreckage of Naboo (Death Star III), they conquered the Gamorrean homeworld and enslaved the natives)
Gamorreans (the Gungans of the Gungans)
Klingons
Vulcans
Romulans
Andorians
Gorns (tail slap, rending claw and jaw)

Bored and/or unserious players (wait a minute, did I even read the rest of this list?) can play one of these races:

They're all essentially Goblins.

Wayfarers and wayward wanderers would do well to wear a wary eye when venturing into the throbbing heart of the Kingdom of Putrefaction, not least of all because of these horrid fairies: The Gackers.

They are the carnal, carnation-skinned, incarnation of the ill will of the accursed Living Gore itself, and their stinking hearts squirt suppurating gloor. With luck you'll never experience that first-hand, but still you are now unable to un-know it.

Reports of their appearance are as varied and wild as the fevered minds of all those of fate unhappy enough to have met them, though common to many tales is the power of their mere look to make a doughty fighter double over and puke.

Steel and fire are said to harm them none, nor arrow through the eye, nor the Gods' own lightning. Never has one been said killed, and none can imagine it being so, but there are seers and lunatics who say certain incunabula of Old Atlantis speak of a way to shoo them off: in the Goblinskin Grimoire, rumored to have fallen from the Silver Chain out of the hand of Moonmad Kyyrel himself, one line only mentions The Gacker:

"Of no avail was either of my tricks, the keening spade nor the limpid kiss, and despair I did of ever seeing the Clouds again, till a starflash stuck me that I must unburden and abase myself before my companions of all my sins against them, of thought will or deed; only then did the lumpen gristle-fairy leave off, cackling, seeming overcome with glee at my shame, as it had gorged on the finest meal of starshine and moonfroth."

Man, those Aussies steal my heart

Merriam-Webster.com's word for today comes from Oz-English, and what a wizard word it is: bludge. To avoid work or responsibility.

Henceforward, I am a self-described dedicated bludgeon. Bludger? Bludgerer? Devotee of bludgery?

. . .of the gloor-shrine besmirched Swamp of Living Gore.

I think I'm reaching too far with that one--of course, I like it, so what do I care if it's over the top?

So, my new game world is full of anthropomorphic animals and I feel like I need to justify that; I don't, but I feel like I do, so I'm going to anyway. Sure, there absolutely are not anthropomorphic animals from space. But that's the whole reason we don't set our games in the real world, right? And people with animals heads have appealed to a lot of people through the ages, to an extent approaching universal--though I don't mean by that anything broader than 'people like them.' Then again, the sources for my game galaxy would have the place full of animal people who speak English, so maybe there would be an explanation involving extraterrestrial visitors in ancient history.

Who are the Vulture Lords and why do they moulder? Do they come From Space? Or Beyond?

How can it be that, among cultures separated by light-years, whose members can detect no commonalities in their religions other than primal archetypes, that these revolting shrines of gloor can be abominable and blasphemous to them all?

I pose that question from the PCs' point of view--but now I realize that I actually have to answer it in a concrete way.

Now this is my kind of game

This is on The Hotness list at BoardGameGeek right now, a solo-play dungeon crawler designed to be played when you're supposed to be doing something else.

As the Welcome file explains, it requires "Slacker attitude and a real commitment to avoiding work. "

The price is right, and I'm imagine it's of interest to some of you. I apologize for posting about it before actually trying out, but I'm at work.

I don't remember when (maybe it was in the fall), on a lark, because it was huge and always sitting on the shelf right at eye level, right outside the door where the 'backstage' of Boise Public Library lets out into the stacks, because I had this idea that he was the Ultimate Aesthete--a sickly French mama's boy fainting into his weak tea beside the foggy coast of Normandy--I started to read Proust, but I've finished the six-volume Modern Library edition of In Search of Lost Time. Where does the time go?

When I googled 'Proust Merit Badge' I discovered this: 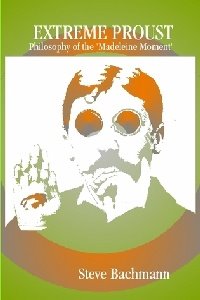 I think I will read it, but I'm more likely to use the image on Zazzle to make my own damn badge and wear it on my suspenders.